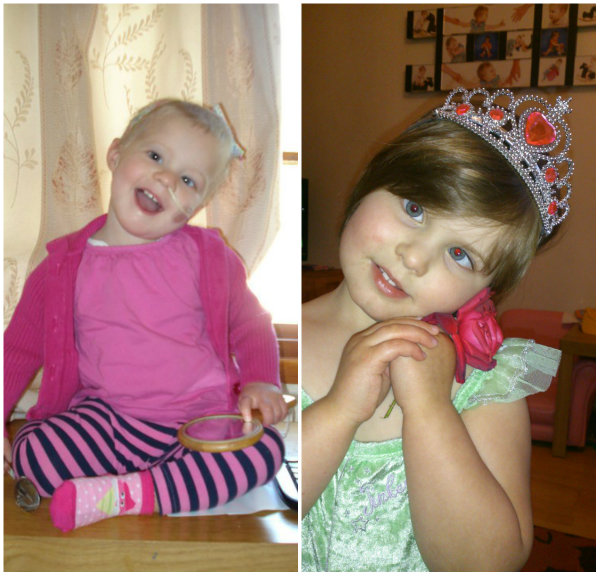 Our charity partnership with CLIC Sargent got off to a wonderful start with our Valentine’s Day of fundraising, where we raised over £1,500 between The Nest, our factories and showrooms! Then it was time for an Easter Day of FUNdraising, which involved egg hunts, egg and spoon races and bake sales. We raised over £1,100 at The Nest and our factories alone, and are yet to confirm showroom totals, so we’re hoping we beat our previous amount from Valentine’s!

In the run up to our next big fundraising event in May (Wig Wednesday), we wanted to get to know a little better one of the children who is benefiting from these fundraising efforts. So here we have Amber’s story…

“Our CLIC Sargent Social Worker Jude just appeared in front of me one day in hospital and talked through what CLIC Sargent could do. We’ve had help with benefits, and we’ve been able to chat at any time. It’s been great to be able to call in at the CLIC Sargent office at Sheffield Children’s Hospital and have a chat and a hug.”

Three-year-old Amber Whiston from Sheffield was diagnosed with pilocytic astrocytoma, a brain tumour, in May 2010 and underwent 20 months of chemotherapy as part of her treatment. Amber, her mum Lara and dad Mark have been provided with support from their CLIC Sargent Social Worker, Jude. Amber’s chemotherapy came to an end in April 2012.

Amber’s mum, Lara, said: “About six weeks before Amber was diagnosed she was having her bottle and we noticed that her eye was spinning. We called the doctor and they said that often happened, which was a big surprise to me. The doctor referred us to hospital just in case, she had an eye test and we found out that she had very poor vision in the eye. They took a non-emergency MRI scan just in case. We heard the results on the day.

“When we heard the diagnosis I just dropped to the floor and everything was just a blur. It felt like I was in a different world and it wasn’t real. Everyone dismissed it at first and couldn’t believe it.”

“Amber had surgery a week after we heard the diagnosis and the first scan after her diagnosis found the tumour to be growing. She then started chemotherapy within two weeks and she’d have to have it for another 20 months.

“She didn’t really know what was going on at first but she’s starting to understand what’s happened to her. Amber is such a tough little girl, she takes no nonsense from anyone and she’s learnt so much throughout the treatment process. She now knows that she has a brain tumour – if you ask her where it is she will point to her head.

“I felt like I’d lost my little girl because there were so many physical changes, but now as she’s doing better I feel like I’ve got her back.

“She finished her chemo in April last year and it was very successful. She had been off treatment for almost a year, and the two scans she’s had since treatment have shown that her tumour has continued to shrink, which is fantastic. She has now had her portacath removed which is really positive as they don’t do that lightly.”

The family also went on holiday to Ben’s Den in Mablethorpe, near Skegness in the summer of 2012 after Jude had advised they would be able to go there free of charge.

Lara said: “It was fantastic that Jude organised the holiday for us, and we had a lovely time at Ben’s Den. Even though Amber was off treatment by that point, Jude was still more than happy to sort it out for us, which was brilliant. It showed that with CLIC Sargent you are never forgotten.”

“CLIC Sargent staff are wonderfully caring and knowledgeable people at a time when you need help the most. When your child is ill your priorities change. They helped us keep control of the little things when we couldn’t control the big things, like our daughter’s health.”

Keep checking back to find out what we’re up to with CLIC Sargent, and if you want to do your bit to help, we’ve got CLIC Sargent pin badges available in all of our showrooms nationwide in exchange for a donation. Wear yours and show your support!